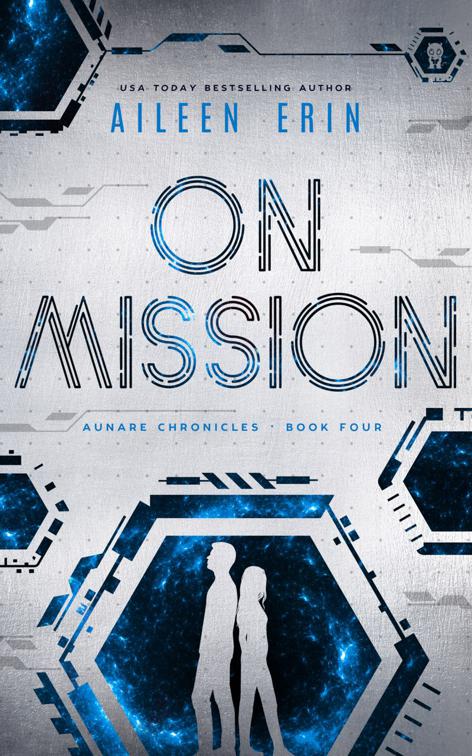 Sometimes my life doesn’t feel real to me.

It’s so different—infinitely better—than anything I had on Earth. I’m not running or hiding or afraid anymore. I’m not dealing with the trauma of my past. I’m not alone because I have Lorne. Every time I look into his eyes, everything else fades away—the war, the fight ahead, the fact that we have so much work to do if we want to win. I see him and I forget that SpaceTech is moving against us, but it’s not just me I’m trying to save anymore. It’s the Aunare.

And yet, the Aunare High Council isn’t listening to a word I say.

I’m the only one who seems to understand the danger that we’re up against, and that if we don’t start acting soon, it’ll be too late. I want to dissolve the High Council, but I’m not sure I should. I don’t even know if I can. But I know that SpaceTech is closing in. Their war ships are stationed at the edges of our colonies’ territory, and I can feel the fight growing closer every minute of every day.

The time for us to act is coming, and I’m not sure how much more politicking I can do. That’s not who I am. It’s not who I’m meant to be. I can only be a fighter. A warrior. A queen.

If no one else will fight with me, then I will do what I need to take down SpaceTech.

Because I’m Amihanna di Aetes, the future High Queen of the Aunare, and I won’t quit. Not ever.


From Aileen Erin, the USA Today Bestselling Author of the Alpha Girl series, comes an epic adventure in space: The Aunare Chronicles!

Book1: Off Planet
Book 2: Off Balance
Book 3: In Command (an eBook Novella)
Book 4: On Mission
Book 5: On Destiny


“On Mission is a truly spectacular continuation of the Aunare Chronicles leaving the reader only enough breath to clamor for more. It was a fantastic on-the-edge-of-my-seat binge and I am positively screeching for the next book!” - Angela, pooled ink reviews

“You NEED you read this story….This story line is complex and has so many layers, twist, & turns. I’m always wondering what will happen next.” - Tracy, Goodreads

“Amihanna is a fantastic heroine. Independent but loyal to her team and partner. Brave, strong, in spirit and muscle, and someone who leads by example…. If I could give this book more than 5 stars I would!”- Sheila K, Goodreads

USA Today bestselling author Aileen Erin is half-Irish, half-Mexican, and 100% nerd—from Star Wars (prequels don’t count) to Star Trek (TNG FTW). She geeks out on Tolkien's linguistics, and has a severe fascination with the supernatural. Aileen has a BS in Radio-TV-Film from the University of Texas at Austin, and an MFA in Writing Popular Fiction from Seton Hill University. She lives with her husband and daughter in Los Angeles, and spends her days doing her favorite things: reading books, creating worlds, and kicking ass.

Aileen is excited for two new releases in her four-part YA space opera series Aunare Chronicles in 2020, starting with Off Balance. After thirteen years fighting for survival, Amihanna di Aetes thought that she’d finally be safe on her father’s homeworld. But with Aunare blaming her for starting a war, everything is as far from okay as it could be. Her only respite from the chaos and pressures of her new life is Lorne ni Taure—the crown prince of the Aunare, her betrothed. He wants her to take her place at his side. To fight in the war with him. But why would she risk her life for people who want her dead?

Her fans call her stories "jaw dropping," "electrifying," "amazing," and "bloody brilliant." Bloggers say "Erin's world-building is excellent and her characters are big and bold"(Escape Into Worlds) and every book is "a magnet that just keeps pulling until you feel as if you are falling down, down, down right into its world" (Tempest of Books). Aileen Erin is the founder and CEO of Ink Monster, building worlds filled with girl power and happily ever afters. You can find her at www.aileenerin.com or on Instagram @aileenerin.