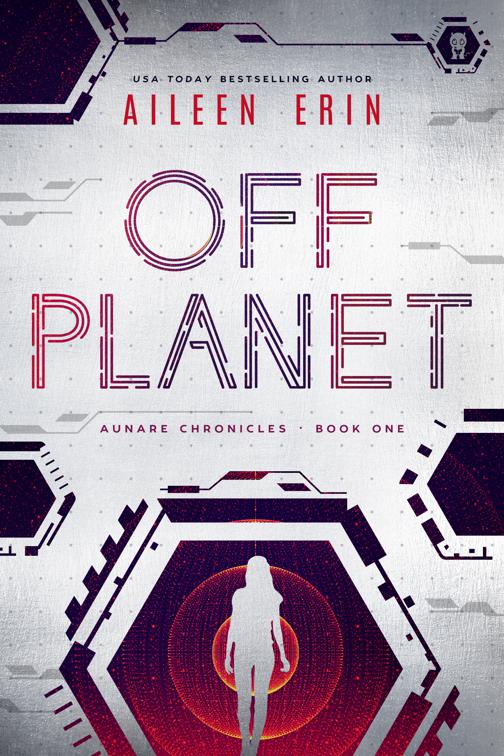 Every day I wake up with fear screaming through every cell of my body, telling me to run, run, run before they find me.

Run before they pull me from my bed and drag me through the streets. Run before they throw me in an execution arena and cheer while I’m tortured until the last scream is ripped from my body.

But every day I shove that fear down and get out of bed. I tell myself they won’t find me today. I’ll be okay. I can make it one more day without being found. I just have to keep going. But it’s a lie. Everything about me is a lie.

I’m not sure how much longer I can keep living a life of lies before I’m caught.

And yet, I have to keep going. I have no other choice. I’ve lasted thirteen years stuck on Earth with my mother, hiding, hunted, knowing that one wrong move could mean our deaths, and I’m not giving up now.

It’s not our fault we’re stuck on the wasteland that is Earth. It’s high crime, high poverty, high pollution, run by a corporate conglomerate—SpaceTech. They seemed like a savior when the world’s economy collapsed but having them in control is even worse than our former fascist government. And just my luck—the only thing that SpaceTech wants more than money is me. Alive. Dead. I don’t think they care as long as I’m found because I’m the half-Earther daughter of the Head of the Aunare military, the biggest alien threat to SpaceTech’s authority.

I haven’t seen my father since I was six.

When everything went violent between SpaceTech and the Aunare, he was off planet. Returning Earth to save us would’ve meant war, and apparently my life wasn’t worth the risk. He abandoned me and my mother here, and so far, we’ve survived. But every day is hard. Whenever things get truly bad, I close my eyes and see myself on a beach, hear a voice calling out my true name—the one I can never say aloud—and I know wherever that is, whoever that is, it’s home.

I have to find my way home somehow. One day, my luck will end. I have to leave Earth and SpaceTech territory before they find me.

If there’s one thing I’ve learned, it’s that no one is coming to save me. Not the Aunare. Not my father. No one is coming. I’m going to have to find a way to save myself.


“In this bleak world, one spark of hope soon turns into an inferno. And just like a fireball, once this story is ignited, it just doesn’t stop.” — Maria V. Snyder, New York Times bestselling author of Navigating the Stars.


From Aileen Erin, the USA Today Bestselling Author of the Alpha Girl series, comes an epic adventure in space: The Aunare Chronicles!

Book1: Off Planet
Book 2: Off Balance
Book 3: In Command (an eBook Novella)
Book 4: On Mission
Book 5: On Destiny

USA Today bestselling author Aileen Erin is half-Irish, half-Mexican, and 100% nerd—from Star Wars (prequels don’t count) to Star Trek (TNG FTW). She geeks out on Tolkien's linguistics, and has a severe fascination with the supernatural. Aileen has a BS in Radio-TV-Film from the University of Texas at Austin, and an MFA in Writing Popular Fiction from Seton Hill University. She lives with her husband and daughter in Los Angeles, and spends her days doing her favorite things: reading books, creating worlds, and kicking ass.

Aileen is excited for two new releases in her four-part YA space opera series Aunare Chronicles in 2020, starting with Off Balance. After thirteen years fighting for survival, Amihanna di Aetes thought that she’d finally be safe on her father’s homeworld. But with Aunare blaming her for starting a war, everything is as far from okay as it could be. Her only respite from the chaos and pressures of her new life is Lorne ni Taure—the crown prince of the Aunare, her betrothed. He wants her to take her place at his side. To fight in the war with him. But why would she risk her life for people who want her dead?

Her fans call her stories "jaw dropping," "electrifying," "amazing," and "bloody brilliant." Bloggers say "Erin's world-building is excellent and her characters are big and bold"(Escape Into Worlds) and every book is "a magnet that just keeps pulling until you feel as if you are falling down, down, down right into its world" (Tempest of Books). Aileen Erin is the founder and CEO of Ink Monster, building worlds filled with girl power and happily ever afters. You can find her at www.aileenerin.com or on Instagram @aileenerin.