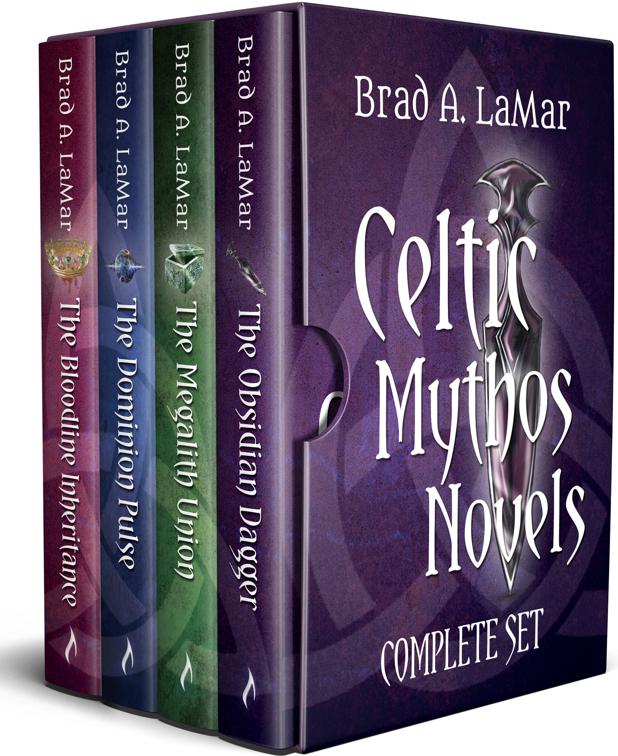 Celtic myths are far from gone.When black magic threatens to obliterate humanity and overtake the magic clans of the Celtic Isles, destiny forces 17-year-old American, Brendan O’Neal, and his younger sister, Lizzie, to intervene. Joining the desperate princess of the Leprechauns, Dorian, and her two loyal companions, Rory and Biddy, they embark on a dangerous and wondrous adventure across Ireland and Scotland to thwart evil and save mankind. The Obsidian DaggerIn The Obsidian Dagger, Brendan, Lizzie, and their new companions must destroy the frightfully powerful stone dagger wielded by an evil witch. Battling the witch’s mutated forces of magical beings, the heroic band will have to reach deeper into themselves than they ever thought possible to find the strength, courage, and will to see their quest through to the end. Brendan will soon learn that the lines between reality, mythology, and divinity are more blurred than he ever imagined. The Megalith UnionJust as life was returning to normal for Brendan as a college freshman, the golden god of Celtic Lore, Elathan maneuvers the tendrils of destiny. Dogged by giants, alphyns, and ruas Brendan, Dorian, Lizzie, and a new cast of characters risk it all to unravel the mystery of the ultimate foe. With Corways under attack and Brendan’s father captured by a forgotten enemy, can Brendan and his allies do enough to prevent the end of days? As the megalith union looms, Brendan and his friends must look to the past to prevent a future where Elathan reigns supreme.The Dominion PulseFaced with the golden god's aggressive plans to free his powerful allies and seize control of Otherworld, Brendan and Lizzie must seek their own power and enlist the help of the wise goddess Bibe. As the worlds becomes further marred in darkness, the heroes must work against time if they want to save Otherworld––and themselves.The Bloodline InheritanceMagicks and humans, friends and enemies, ally themselves in a battle to save all realms… In his quest to become an Immortal, Elathan seeks the Emerald Crown of the World, which holds a magic so ancient and powerful that its been hidden from all realms. As Earth’s rightful Protector, only Brendan stands a chance to stop the golden god, to save the Earth and her inhabitants. But when Brendan falls under a curse that poisons his mind, Lizzie, Dorian, Frank, and their friends must band together to save him while Elathan grows in power.“An amazing young adult fantasy series with fast paced adventure, lovable characters, and super scary villains…"–5 star review from Reading is Better than Real Life

When he’s not writing fantasy novels, Brad A. LaMar works as an author and educator in the Indianapolis Metropolitan area. He has worked with middle school age students for fourteen years and loves the enthusiasm they can bring to learning. . Sure, he enjoys long walks on the beach at sunset, but it’s hard to beat getting into a great story whether he’s writing it himself or enjoying the fruits of someone else’s imagination. He is married to Lori, a beautiful and supportive woman, and together they’re raising Evan and Paige, two intelligent and wonderful children. Brad especially enjoys the way a story makes a reader think, laugh, and react. He works hard to deliver those experiences in his bestselling YA fantasy series, Celtic Mythos, which begins with The Obsidian Dagger. See why his fans say “his words play out like a movie in your mind,” and that “fans of Percy Jackson will devour” his books. You can learn more about Brad online at balamar.lightmessages.com.